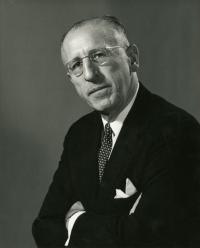 Clarence E. de la Chapelle, M.D., was a greatly esteemed cardiologist and professor of clinical medicine at the NYU medical school. Born in New York City in 1898, De la Chapelle's long relationship with NYU began as a medical student at the University & Bellevue Hospital Medical College. After graduating in 1922, de la Chapelle completed his medical training at Bellevue Hospital, and then joined the faculty of the medical school in 1925. De la Chapelle eventually took various leadership roles at the medical school, including serving as Assistant Dean and Associate Dean from 1943-1948, and as Associate Dean of the Post-Graduate Medical School from 1948-1963.

On February 18, 1971, the Bellevue Hospital Medical library was named for, and dedicated, to Dr. Clarence E. de la Chapelle. The honor was bestowed on this noted bibliophile in recognition of his service to the Bellevue House Staff through his years of guidance and devotion to the Medical Library. De la Chapelle also served for many years as the chairman of the Medical Library Committee.

In 1983, de la Chapelle endowed the NYU Medical Library Archives in memory of his late wife of 51 years, the former Lillian Buckmann. This endowment has allowed for the acquisition, description and conservation of invaluable documents, letters, and historic records relating to the history of the school and NYU Langone.