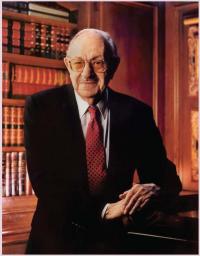 Herman Robbins, MD, physician, surgeon, teacher, Editor of the Bulletin of the Hospital (1979-1991), and Chairman of the Department of Orthopedic Surgery (1972-1981), is a man whose compassion and gifts in orthopedic surgery have served, with outstanding excellence, his patients, the residents, and the faculty of the NYU Langone Orthopedic Hospital. Trained at the Université de Lausanne in Switzerland, Robbins entered the Orthopedic Hospital's residency program in 1951, graduating in 1955 and eventually joining the faculty. Robbins was a master anatomist and well-remembered for the many extra hours he spent teaching surgical anatomy to orthopedic residents, while meeting the demands of a large, successful private practice. His Chairmanship of the Department of Orthopedic Surgery covered the critical years of planning and executing the hospital’s transformative move from uptown to 17th Street. In 2005, Robbins was honored with the Frauenthal medal at the 100th Anniversary Gala of the hospital, with other former Chairmen of the Department.

The Herman Robbins Medical Library was named in 1993 in honor of Robbins invaluable and indefatigable service to the NYU Langone Orthopedic Hospital and to its residents, patients, and staff. In February 27, 2008 the library was re-dedicated to Herman Robbins for his lifetime of tireless service and his extraordinary generosity.