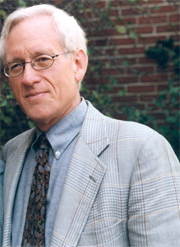 Born in Cincinnati, Ohio in 1939, Dr. Bryant completed his undergraduate degree in French literature at Princeton University in 1961, graduated from Columbia University College of Physicians and Surgeon in 1965, and completed an Internal Medicine residency at the Maine Medical Center in Portland from 1966 to 1969.

From 1969 to 1971, Dr. Bryant was in the United States Navy and later went on to a successful general internal medicine practice in Portland, Maine from 1971 to 1999.

Questions and Answers with Dr. Bryant

Why he became interested in physician-writers
I first became interested in doctors' nonmedical writing about twenty years ago, wondering what doctors, with all their education and exposure to "life" thought was worth writing about. Some names (Maugham, Williams, etc.) came to mind right away, but others I found looking through references like "Contemporary Authors;" reading books like Dana's "Poetry and the Doctors," McDonough's "Poet Physicians," Trautmann and Pollard's "Literature and Medicine," issues of "Literature and Medicine;" and quizzing secondhand bookstore owners. The books themselves came from secondhand bookstores in the States and England, at first from actual visits, then from catalogs, and more recently the Internet.

Favorites in the collection?
I guess the Williams first editions, and perhaps Alex Comfort's "Silver River," his first book, written, I think, when he was still in his teens.

Essays
“A roster of twentieth-century physicians writing in English,” Literature and Medicine 13, No. 2 (1994): 284-305
“Telling tales out of school – Portrayals of the medical student experience by physician-novelists,” Journal of Medical Humanities 17, No. 4 (1996): 237-254
“Hospitalists and officists: Preparing for the future of General Internal Medicine,” Journal of General Internal Medicine 14 (1999): 182-185